The Lake Tahoe Relay was an outgrowth of a New Year’s gag by a group of college runners in 1959 from San Jose State College. They circled the Lake in 8:47:05 on that evening. On a beautiful Sunday morning in 1964 four Sierra Nevada Track Club runners out of Reno (Skip Houk, Stan Hayes, Bud Forman and Ron Eller ) broke the 1959 72 mile course record in a time of 7:22:10. Though they were blistered and bloody by the end Skip thought this had the potential to be a great event. He spoke with his friend Robert E DeCelle Sr who was then chairman of the AAU’s long distance Running Committee. Bob encouraged and sanctioned the relay through the AAU hoping to give potential Olympic runners a chance to run and train at altitude. The Olympic training center was at Echo Summit at that time getting ready for the Olympics in Mexico City. 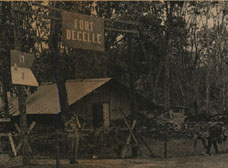 In 1971 Capt. Robert E DeCelle Jr. was killed in action in Vietnam while drawing enemy fire away from troops on the ground. Robert Jr had been a good High School and Junior College runner before serving in Vietnam. He left behind a wife and 8 month old son Aaron DeCelle at his passing. Aaron is now a Major in the Army. Peter Matti who had become the Long Distance Running Chairman for the AAU asked if he could change the name of the relay to the DeCelle Memorial Lake Tahoe relay in Robert Jr’s honor.

In 1982 the Stereoscope Loafers erased the existing record for the 72 mile relay in a time of 6:16: 28. The team consisted of 6 Olympians from Columbia. Domingo & Miguel Tibiduiza, Jairo Carrea, Henry Carvajal, Joaquin Leano and Derek May from South Africa. All UNR runners. This record will probably never be beaten. 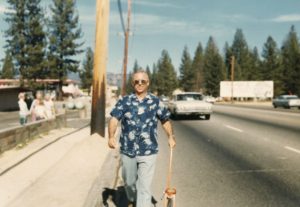 The past 10 years the Chico Track Club has dominated the Open Men’s division only once in 2011 being beaten by BYU. McFarland High School has dominated the Boys High School division. Lake Merritt Joggers and Striders have been great supporters of the relay setting records in the Men’s 50, 60 & 70 year old divisions. The race has evolved from its humble beginnings but still keeps its small family feel unlike other large relays. It was a fact that in the beginning years Bob would fire the gun and then go fishing until he thought the first teams would arrive 7 hours later. There were no port-a-potties, very small ribbons and sometimes no timers at the handoff zones. The course is hilly with altitudes up to 6,500 ft. run along the highway around scenic Lake Tahoe. The course is open to traffic which can be a little intimidating for unseasoned runners. The only traffic control we have is on leg 1 with the help of the Boy Scouts from the local LDS church.

After Robert DeCelle Sr passed away 2 weeks after the Relay in 1997 his family had to decide if they would continue putting on the relay. With the red tape of working with 2 states and 5 counties without the help of sponsors they wondered if it was worth the time and effort especially since none of them live near Lake Tahoe. The family decided to continue to make the 2nd weekend in June a DeCelle family reunion. It is a labor of love and a memorial to our father and brother. All proceeds have gone to High School and Youth running programs within California and Nevada. April DeCelle Carter the youngest of the DeCelle children took over as Race Director in 1997. However, all of the timers, workers and the band are DeCelle family members or close friends.